We see the effect and the power of His presence at that mysterious and awesome moment of creation, when “the earth was formless and empty, darkness covered the surface of the watery depths.” This shapeless, purposeless blob of matter tumbled through space with no direction and no observable reason to exist.

The part of God’s Person that the Bible identifies as the Holy Spirit arrived with no warning. “And the Spirit of God was hovering over the waters.” The original word translated hovering means “brooded,” which describes the action of a mother bird sitting on her nest of eggs. Likewise, God the Holy Spirit drew life out of the chaotic earth and produced light and order.

The creative power of the Holy Spirit in bringing the physical world into existence was not God’s ultimate focus. He knew that the man and woman He would create would sin and become morally corrupt and spiritually dead. In His love and mercy, God – through His Spirit – “hovers” over the lost person and brings life out of death.

Because the Holy Spirit is a Person, He possesses intellect. He “knows.” He knows “the deep things of God,” or all there is to know about God.

The Holy Spirit’s knowledge of God also includes all the divine truth that comes from God.

The Holy Spirit opens our understanding to the meaning of the scripture and shows us how they apply to everyday living. The Holy Spirit is our live-in Teacher who is ready to help us understand and apply God’s Word every time we read it.

The Holy Spirit possesses emotion along with intellect. Paul warned us not to “grieve the Holy Spirit of God” (Eph. 4:30). Grief is a manifestation of emotion. A person must have the ability to love before love can be grieved. The Holy Spirit, who is one with God, loves every believer whom He indwells. He grieves when we fail to respond to His teaching and guidance.

Surveillance cameras are common today. When we enter a bank, cameras watch us from the time we leave our car in the parking lot until we stand at the teller’s window. In this psalm we learn that God’s Spirit observes us everywhere we go and is sensitive to our every thought and action.

Because the Holy Spirit is “everywhere-present,” God’s children are constantly within the caring, loving circle of God’s concern. Despite our disobedience and rebellion, He continues to “own” us. If we try to run away from Him, He runs alongside us. If we attempt to hide from Him, He is waiting for us in our hiding place.

The beauty of it all lies in the truth that God never stops pursuing His children, no matter where we try to hide. He is like the loving shepherd walking through the lonely, dangerous night in search of one lost sheep. When the shepherd found the sheep, he put him on his shoulders and carried him home.

Often we cannot sense God’s presence in our lives because of the darkness of sin, the shadows of worry and anxiety, the shades of suffering and death, and the awful problems of disease and suffering. We need to remember that God came into the world in the presence of the Holy Spirit to provide a constant source of courage and strength. The Holy Spirit is all-powerful, all-wise, and everywhere-present. So what is there to fear?

Acts 2 Describes the event when Holy spirt came to those in the upper room.

May 31 2020 in the midst of COVID 19 is Pentecost Sunday. As the team were listening to hear what Pappa was saying we felt that the whole atmosphere was clogged with various “spirits”. None that could displace Holy Spirit, but as others were worshiped by people, so there was less focus on Holy Spirit.

The Scramble for Africa, also called the Partition of Africa or the Conquest of Africa, was the invasion, occupation, division, and colonisation of African territory by European powers during a short period known to historians as the New Imperialism (between 1881 and 1914).

Representatives of 13 European states, the United States of America and the Ottoman Empire converged on Berlin at the invitation of German Chancellor Otto von Bismarck to divide up Africa among themselves “in accordance with international law.” Africans were not invited to the meeting.

Seemingly like Jesus’ garments were divided up by the power that were so Africa was carved up. Our redemptive purpose is to carry the capacity of signs, wonders and miracles. The very work of the Holy Spirit. Yet we have ancestral worship abounding, we re-enact the  Great Trek and celebrate the Battle of Blood River in God’s name. Just another form of ancestral worship and the religious spirit being celebrated which is idolatory. Too many other spirits. Have we locked out the Holy Spirit from South Africa and by extension Africa? Cape Town (Marion Island?) is the southern gate to Africa. Could it perhaps be defiled?

Rodney Howard-Browne left SA for USA as there were more opportunities there, nice way to say more acceptance? From the extract below he is credited with all the recent revivals in the USA.

Howard-Browne is credited with introducing holy laughter to Carpenter’s Home Church in Lakeland, Florida during a series of revival services with Karl Strader in 1993. The holy laughter revivals later spread to nearby churches in Melbourne, Titusville, Stuart and Vero Beach, Florida.[23][24] Howard-Browne is credited with bringing holy laughter to the charismatic Toronto Airport Vineyard Church (soon after expelled by its parent Vineyard Church) at a 1994 revival in Toronto, Canada with evangelist Randy Clark, known as the “Toronto Blessing,” and then a year later, to Assemblies of God (AOG) Brownsville Church in Pensacola, Florida with evangelist Steve Hill. The event became known in Christian circles as the Brownsville Revival.[23][24][15] Howard-Browne also ministered under pastor Mike Rose at the Juneau Christian Center (formerly known as the Bethel Assembly of God) in Juneau, Alaska, an AOG church that Sarah Palin later attended after becoming governor of Alaska

We often despise Africa even though it is our continent. 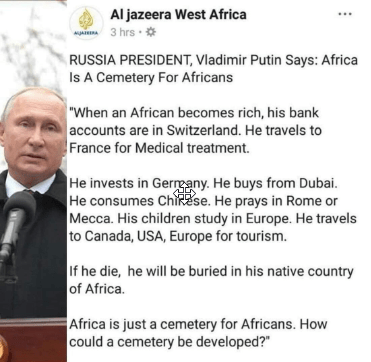 In Eze 37 The bones were not dead as such but dry. The breath of God brought live. It is time for us to make room for Holy Spirit and to welcome in the move of Holy Spirit no matter what that looks like.